Am high with 103 degree fever and my brain cells don’t die. Saw the promotion of movie Delhi 6 . It was then that my brain juices brewed the following mixture 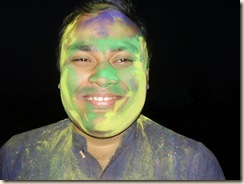 As I write this, songs from Delhi-6 keep looping in my ears.

OOps !! I did it again. With GIMP and clever thinking I changed the following image to the resulting image on the right.

Fine !!!, enough of my self obsessed statements.  But again who likes to be just “Just another brick in the wall”.

I always wished to visit golden temple. On 25 April 2008 with almighty will and grace it came true.

This visit was a result of divine will. As my previous humanly attempts resulted in standoff between divine will and humanly selfish wish.

Almighty had fixed an appointment for me at vaisho devi too. Thus soon after darshan at golden temple. We left

for Jammu by bus. The  next day, in  wee hours of the morning we started our ascend to the holy cave.

Talking about the weather It was cloudy and at times was drizzling . We reached the holy cave by 13:00. Took a bath with chilling holy water and after darshan we started the descend via bharavnath.

Finally reached udhampur to board our train to Delhi.

Thanks to the mighty will  now I can strike of one wish from my bucket list.

After a Long silence I am back with my usual stuff of blogging. Where was I this July ? To start off, I was with my team in Dhanulti (Near Dehradun) for a two days trip. We had a gala time there.

Later I left for an spiritual mission to Puttaparthi (A.P) .
Traveling kept me busy through out this month. Overall  I enjoyed , got recharged and contemplated on my future. July was not only materialistic it also revived the spirituality and my interest in traveling. I am already Looking forward to my next vacation.

Idiot box kept me busy for last few days, during these days I never visited my website and wrote any code.
Now returning back to coding and my website . Keep visiting for more

As thought by Vishal
Blog at WordPress.com.
Loading Comments...